Monitoring the population trends of predators in small, fenced off reserves is crucial for managing the ecological balance within them. Apex predators, such as the Spotted Hyena (Crocuta crocuta), can affect the density and composition of herbivores and meso-predators within an ecosystem. Spotted Hyena are the most abundant, social, and largest members of the Hyaenidae family with a distribution covering most of sub-saharan Africa. This species is classified as ‘least concern’ by the IUCN as it has a population higher than 10,000 individual adults, however, these numbers are decreasing due to habitat loss and fragmentation outside of protected areas.  Spotted Hyenas ensure an ecosystem remains healthy and sustainable as they prey on sick and weak animals, ensuring the prevention and spread of disease while maintaining a healthy herbivore community. Therefore, the monitoring and understanding of such species are essential for maintaining population stability and ecological integrity. 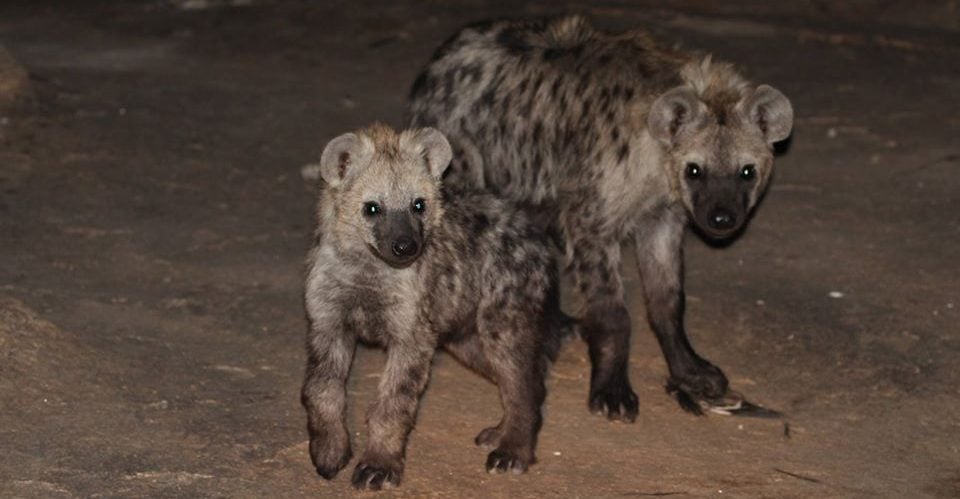 Karongwe Private Game Reserve (KPGR) is a fully fenced private reserve located in the Limpopo Province of South Africa, where GVI Limpopo have called home for the last 19 years. To date, we know very little about the current hyenas on KPGR. There have been no thorough hyena-specific studies conducted on KPGR, with little data analysis and interpretation done in the past. Therefore, GVI Limpopo designed a project aimed at providing much needed research on the reserves Spotted Hyenas, by utilizing camera traps to monitor the individuals within the reserve. By monitoring these animals, we aim to identify each individual as well as the sex and age ratios, establish an updated ID kit, study their movements, habitat use, behaviour, and diet, which we hope will help us better manage their populations in the future. Nocturnal predators, like our spotty friends, occupy several hundred kilometres at relatively low densities, making monitoring increasingly difficult. The understanding of spatial utilization as well as population density of spotted hyenas provides valuable insight into the effective management of a reserve to ensure a healthy, functioning ecosystem.

Camera trapping is a non-invasive method often used to monitor wildlife to estimate species density and population sizes. In the beginning of 2019, we received a generous donation of camera traps from René Koopman (Imvubu Lodge) to help better understand the Spotted Hyena population on KPGR. Cuddeback Professional Color (model 1231) white flash cameras were used as they produce high quality nocturnal colour images. These images should allow for easy identification of individuals by their spots or unique characteristics. A total of 26 camera traps were placed in the field, 11 along the northern fenceline and 15 in the southern region. Camera traps were placed along the northern fenceline for a study monitoring elephant interaction with gates and chili oil as an elephant deterrence. This provided the perfect opportunity to monitor this area for hyena activity without the additional sampling effort. 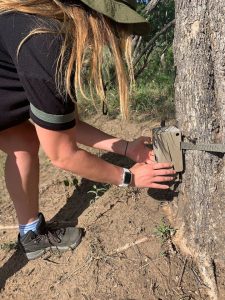 Setting up a camera trap in the field. 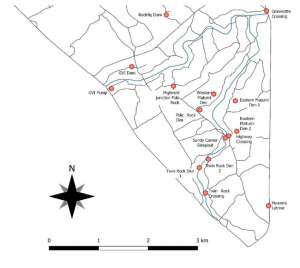 In August, we were notified by the warden that there was an active hyena den south of one of the non-perennial rivers (the Matumi River), which we named the “Eastern Matumi Den 1”. After close inspection of the possible den, we confirmed that it was active due to numerous tracks surrounding the den as well as bone fragments and fresh parts of a carcass. We placed three cameras in the area surrounding the den to monitor activity. The results from these cameras were rewarding, confirming already known individuals of the KPGR clan, two new individuals, as well as the discovery of a 2–3-month-old cub (G5’s 2019 Cub) born to G5 (a previously known clan member). During the monitoring period of the Eastern Matumi Den 1, we captured the adult hyenas bringing a carcass to the den as well as activity by G5’s 2019 Cub. The last spotted hyena activity recorded at this den was in the beginning of September. Unaware of other possible den sites, we removed these cameras and placed them along other sites of interest in the area. 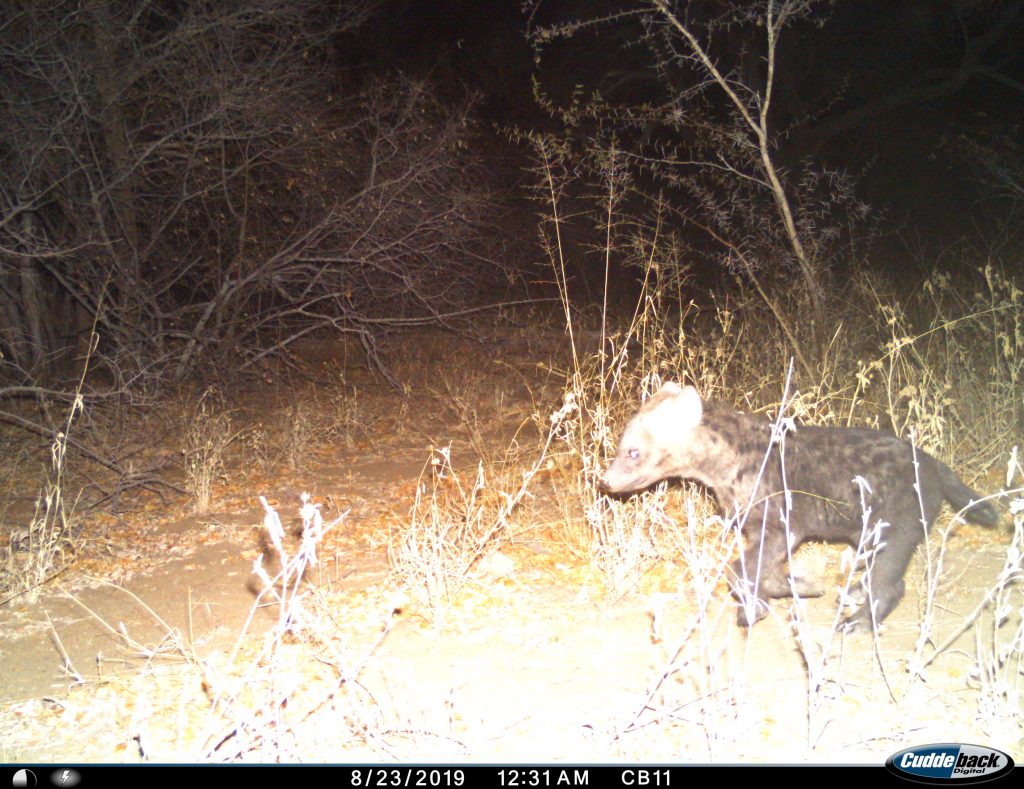 Luckily, one of the five historical dens called “Western Matumi Den” was found to be active by the clan after relocating from Eastern Matumi Den 1. By mid-November, we went in to check the camera traps and had a visual of two hyenas! They were then captured at another site in the same area named “Pole Rock Den” until early December. In late December, the lion pride spent a week in the southern region of KPGR and were captured moving past the Pole Rock Den. This could have resulted in the hyenas moving to a den site out of the area along the Matumi river. There has been no further extended activity recorded at the den sites since, except for one recording of hyenas moving past a site named “Twin Rock Den 2”. To date, we have been able to identify 5 individuals within the reserve thanks to this camera trap monitoring project. 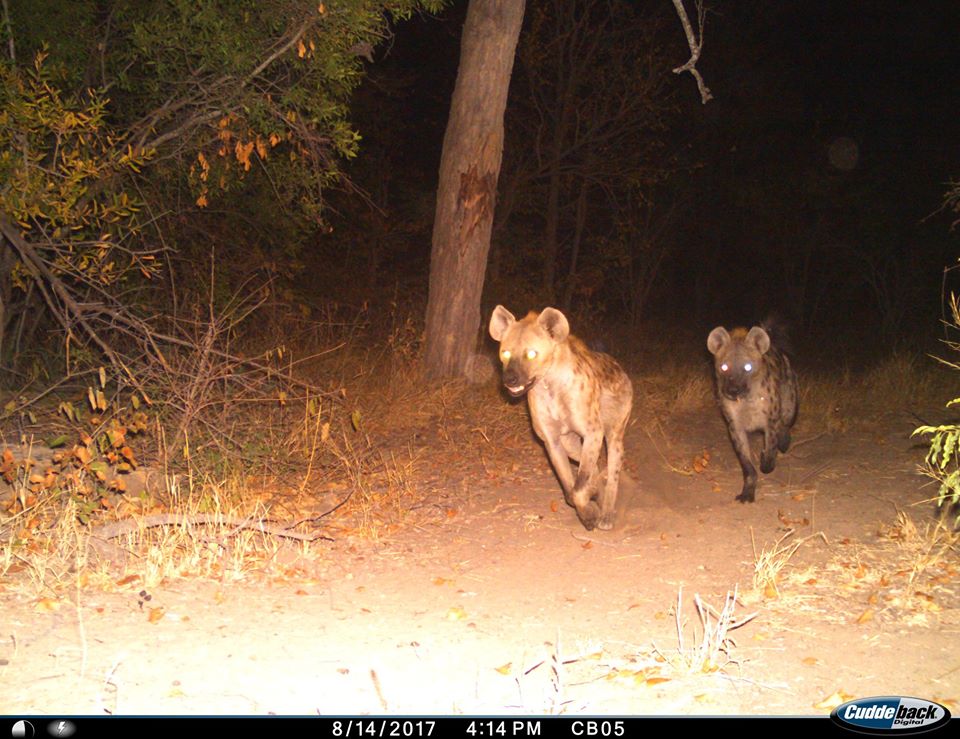 Spotted Hyenas of KPGR arriving back to their den caught via camera trap.

As we approach the end of 2020, we aim to introduce a pilot study to survey the reserve using 19 camera traps in a 2km x 2km grid format. This will help compile occupancy models to determine areas of high utilization by various species, especially Spotted Hyena. Because Spotted Hyenas can be identified using unique spot patterns on their flanks, it allows for capture-recapture analysis of camera trap photos. Once this study gains more traction and our research assistants become more familiar with the weekly required maintenance, we hope to deploy all 52 camera traps from our arsenal into the field using a similar grid format. The difference however would be dividing the reserve into four blocks (consisting of twenty-one stations each with two traps), with cameras staying in each block for 50 consecutive days before being moved, totaling 200 consecutive monitoring days across the reserve! This should provide a far more in-depth analysis of the reserve’s hyena clan (and hopefully pick up some more elusive and rarely seen species at the same time!). 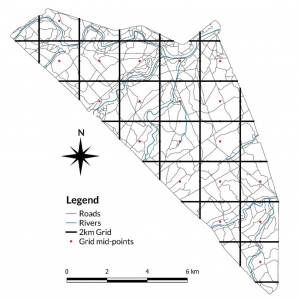 It is an exciting thought, knowing that even the small amount of monitoring we were able to accomplish in the second half of 2019 produced such amazing footage and results. What’s more exciting is the promise of truly understanding these underappreciated and often over-looked predators in more detail with the introduction of our pilot study across the reserve, in order to assist our partners with management decisions to promote population stability and ecological integrity in the future. 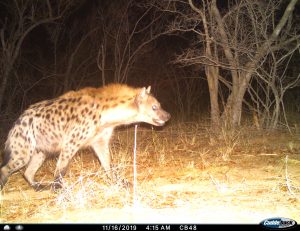