0386 521 006   Apply Now
Announcement
TRAVEL UPDATE: We're open! Where can I go?
Home About Us The Story of GVI
Apply Now
Enquire Now
Call Back Request

THE STORY OF GVI

It started with the tough questions — What am I doing here? Why am I doing this? Is what I’m working on really making a difference?

“When I turned 18, I volunteered with an organization in Patagonia for three months. Although I had a great experience and would recommend it to anyone, what affected me was that the projects we were working on didn’t really seem to have any community benefit. One of the things we did was build a bandstand in a remote village. I remember thinking, as I was chopping up logs for this bandstand: Why are we building this? Why is no one in the local community coming to see it? Why are they not involved? Is this really necessary?” — Richard Walton, Founder Of GVI.

A few years later, Richard, the born-explorer, moved from his native Britain to a remote island in the middle of Lake Malawi which you could only get to once a month by boat. There, he set up a few bamboo huts which he rented out to backpackers. As he got to know the local community, he learned more about their ongoing project and challenges and was again faced with the issue of international travellers visiting a local community, but not contributing to their development.

This time, he decided to do something about it. He picked up the phone and contacted his college friend, Ben Greig, a marine biologist carrying out research off the coast of Honduras. They had both had a similarly enlightening experience travelling abroad as young adults. Richard shared his frustrations and together, they decided to try their hand at running a sustainable development project of their own which was more in line with their values.

They looked first at running a community development project with the Malawian community Richard had developed a connection with, but their commitment to health and safety ruled this remote location out. Instead, they looked at setting up a marine conservation project in Honduras.

One of the first 21 participants lucky enough to join this GVI project was Andrea Mackay. When asked about the experience 20 years later she said, “There is certainly a sense that we were so very fortunate to have been part of that particular expedition. There was a certain magic created by that particular group of strangers coming together at that particular time in that particular place”.

Sadly, Ben passed away soon after this pioneer program ended. His enthusiasm for conservation and environmental education still lives on in our commitment to this very task. Afterward, Richard continued setting up connections with local organizations and communities around the world and recruited many passionate individuals along the way, including Steve Gwenin, a marine biologist who would eventually become our CEO.

Over two decades later, GVI has engaged over 35,000 participants, set up 600 community partnerships, and currently runs hundreds of programs in five continents worldwide. Richard and Ben’s vision to not only facilitate global citizenship and leadership skills in young adults, but to allow them to have a truly positive impact on local communities and environment is very much alive. Today, our mission is to build a global network of people united by their passion to make a difference.

For more information on our history, download our 20th anniversary magazine below. 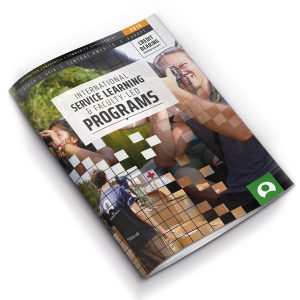