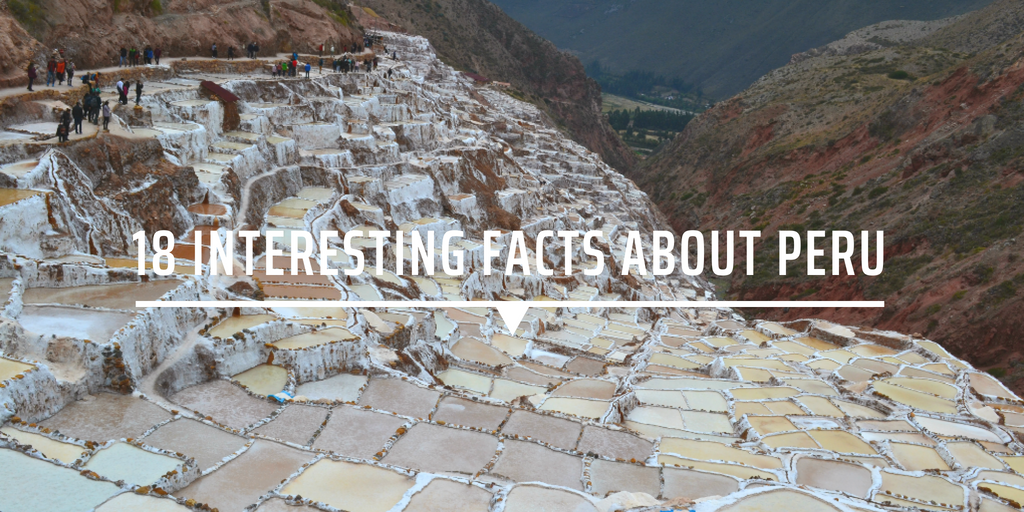 All of this combined makes Peru one of the most interesting places to volunteer in South America.

Here are some of the most interesting facts about Peru!

1) There are three official languages spoken in Peru

Spanish, Quechua, and Aymara are all official languages in Peru. But these are only the tip of the linguistic iceberg. Once you travel toward the Amazon jungle, the indigenous people speak an additional 13 languages.

2) The capital city of Peru is Lima

Francisco Pizarro founded the city in 1535 to serve as the seat of power for the Spanish conquistadors. Today, Lima is the only city in Peru with more than one million inhabitants.

3) The population of Peru is over 29 million

Peru is a multi-ethnic country. Its population is a combination of groups that have inhabited the land for over five centuries. As a result, the people treat their nationality as citizenship and not an ethnicity. Built in the 14th century, Machu Picchu lies more than 7,000 feet above sea level. The ancient Inca city was lost for over 400 years and is now a designated UNESCO World Heritage Site.

4) Machu Picchu is a new Seven Wonder of the World

Rediscovered in 1911 by Hiram Bingham, intrepid travelers flock here every year to tackle the Inca Trail and admire the architectural feat created by the ancient Incas. In 2007, the Lost City was voted in as a New Seven Wonder of the World, only adding to its mystical appeal.

5) Machu Picchu is an astronomical observatory

Archaeologists are baffled as to how the ancient Incas understood the alignment of the stars so well. The civilization built each sun temple and the sacred Intihuatana stone to line up with the sun for each solstice.

6) No wheels were used to build Machu Picchu

It’s believed that hundreds of men pushed rocks up the steep mountainside to build this wonder. This feat is made even more impressive considering some stones weighed more than 50 pounds.

7) Peru has the highest sand dune in the world

The Cerro Blanco sand dune towers over the Sechura Desert at 3,860 feet.

Use one of your weekends off from volunteering in Peru and travel to the nearby town of Huacachina.

You can hire a dune buggy or sandboard and spend hours sliding down one of the largest natural wonders in the world. Located between Bolivia and Peru, Lake Titicaca has an elevation of 11,436 feet.

But that’s not the only thing that makes this natural wonder special.

Jacques Cousteau, a French explorer, discovered ruins of an ancient city underneath its surface. Today, their descendants (the Quechua People) still live on 120 self-made floating islands in the lake.

9) The deepest canyon in the world is in Peru

To put that in perspective, that’s twice the depth of the United States’ Grand Canyon.

If you want to visit this natural attraction after your volunteering program in Peru, all you need to do is head to the nearby city of Arequipa.

10) Peru is home to the mysterious Nazca Lines The Nazca Lines are a collection of more than 70 giant human and animal geoglyphs.

Discovered from the air in 1927, in the desert plateau between Nazca and Palpa, it’s considered one of the world’s greatest archaeological mysteries.

Some people believe it’s an ancient alien landing strip, while others think it forms part of a sophisticated astronomical calendar.

Did you know that Peru is considered one of the top foodie destinations in the world? Michelin star chefs from all over the world fly to Lima and Cusco to learn how to master their trade.

Need more proof about Peru’s gastronomic clout? Since 2012, the country has been named the World’s Leading Culinary Destination. The potato is a superfood: containing almost every kind of vitamin you need. It’s birthplace? Peru.

With more than 3,000 types of potato grown in the country, why not try sample as many as possible in between conducting English classes or your community development volunteer work.

Ever heard of the Camu-Camu fruit?

It grows in the Amazon rainforest and has a higher concentration of vitamin C than any other food.

If you’re feeling a little sick after arriving in Peru, stop by the local supermarket and give your immune system a much-needed boost!

13) Guinea pigs are food, not pets

If you’re volunteering in Peru during an important cultural festival, keep a lookout for cuy.

Cuy is a traditional dish that’s made from roasted guinea pig. The animal is served crispy and complete with head, legs, and eyes.

For the adventurous eaters that try this delicacy, it’s a healthier choice than llama meat, and it contains a great deal more protein.

Pisco sour is a Peruvian brandy that is mixed with lemons, sugar, water, egg whites, ice, and bitters.

Invented in the early 1920s by an American bartender, you can also try a version of the drink (called chilcano) that’s made without the egg whites.

The Giant Andean condor weighs 27 pounds, stands four feet high and has a wingspan of up to 14 feet.

Despite its massive size, it’s able to fly for hours without flapping a single wing. The bird was considered sacred by the Incas but has unfortunately made its way onto the International Union for Conservation of Nature (IUCN) Red List of Threatened Species.

Many farmers in Peru hunt the condors as they believe the birds will kill their livestock. Another factor threatening their survival is pesticide poisoning in the food chain. One of the most interesting facts about Peru is that it has 90 different microclimates. No wonder the country boasts an abundance of wildlife and plant species.

The best place to go to grasp the sheer range of its diversity is the Manu National Park. It holds a biodiversity record after recording more than 1,000 species of birds, 1,200 species of butterfly and 287 species of reptiles.

The Puya raimondii stands at a height of five meters. It can take between 80 and 150 years to flower. Once it does, it can produce over 8,0000 white blooms.

18) Peru’s national tree is the Cinchona

The tree gets its name from the Countess of Chinchon. The story goes that the wife of the Viceroy of Peru came down with malaria in 1683. She was given tea made from the bark of the tree and made a full recovery.

The bark of Cinchona trees contain an ingredient called quinine, and it’s still used today as a medicine for treating malaria. Travel to Peru and make a difference

Want to explore one of the world’s most fascinating and diverse countries?

Sign up for one of our volunteering programs in Peru and make a difference at the same time.

Choose from programs such as teaching English, women’s empowerment initiatives or creating sustainable community development solutions. Speak to a member of our team today.