0386 521 006   Apply Now
Announcement
TRAVEL UPDATE: We're open! Where can I go? and answers to your questions about COVID-19
Petrina
Darrah
Petrina Darrah is a travel writer from New Zealand with a passion for responsible travel and gender equality. She has worked in France, Colombia, the Philippines, and Tanzania, and has travelled to about 50 countries in between.
Community Development Cusco Internship Responsible Travel Travel Volunteering
0 Likes
Share
Facebook
LinkedIn
Twitter

Quechua: The surviving language of the Inca Empire 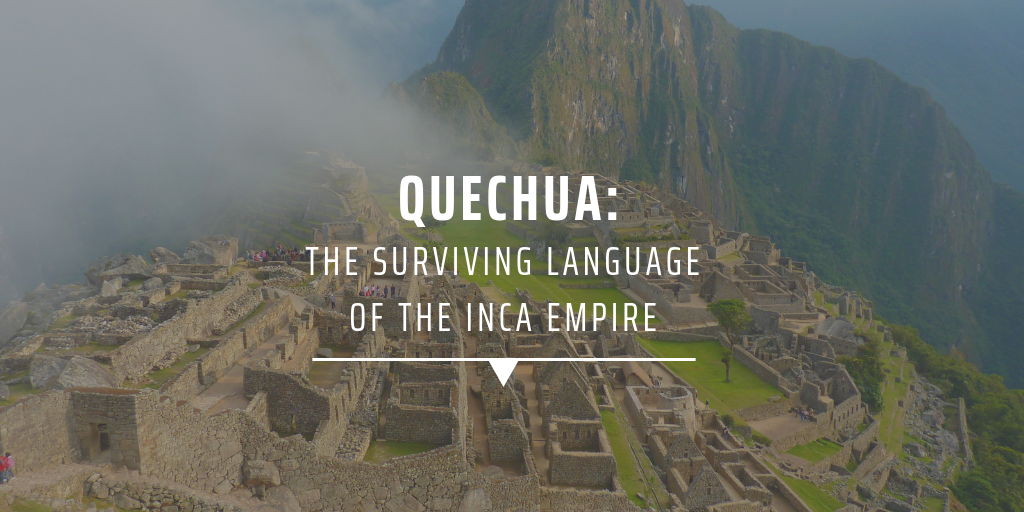 With roughly ten million speakers, you’re almost certain to come into contact with Quechua when visiting South America. The ancient language is part of daily life for many Peruvians and has major historical and cultural importance.

Cusco was once the capital of the Inca Empire. Today, the city is still a cultural hub for Quechua-speaking people.

Quechua language and traditions are interwoven into life throughout the city. If you’re considering volunteering in Cusco, understanding more about the Quechua language will give you a greater appreciation for the people descended from the once-mighty Incas.

The origins of Quechua Quechua is also known as Runa Simi, which translates to “the people’s language”. It is spoken widely in South America, to the extent that there are now 45 distinct dialects within the Quechua language family.

The Quechua spoken in Cusco is often regarded by Peruvians as the purest form of the language. According to the book ‘Language Ideology, Policy and Planning in Peru’,  even the founders of the Peruvian Academy of the Quechua Language held this belief. The reasoning was that in pre-Columbian times the Cusco dialect was supposedly spoken by Inca nobility.

Linguistically speaking though, Cusco Quechua is no “purer” or closer to the original Quechua language than variations spoken in other locations today. The exact origins of Quechua are unknown, but it is generally agreed that Quechua was spoken in Peru for more than a thousand years before the Inca people came into power. However, they promoted its use and helped the language to spread throughout the Andean region.

The Inca rulers made Quechua the official language of Cusco when the city became their administrative and religious capital early in the 1400s. When the Inca civilisation expanded further into current-day Peru in the fifteenth century, Quechua became the lingua franca of the rest of the country.

The highly organised nature of the Inca Empire, which flourished from the mid-1400s to 1533, played a big part in spreading the language.

During their rule, they used a system of public service called mita, which meant whole tribes could be moved from one region to another. This was a way of managing rebellious groups and also of expanding the reach of their loyal subjects and moving Quechua speakers into newly controlled territory. Moving large armies around their empire also helped the spread of Quechua. By the time the Spanish arrived in the 1500s, the Quechua language had already spread as far as what is now known as Argentina, Brazil, and Colombia.

Before the arrival of the Spanish, there was no written version of Quechua. As such, the Spanish used the Latin alphabet to write down the language. Quechua influenced the evolution of Latin American Spanish. Many common words in Peruvian Spanish can be traced to the language. One example is the use of the Quechua word “palta” for “avocado” – in the rest of the Spanish-speaking world, the word “aguacate” is used.

Many names have also been loaned from Quechua. The best example is “Cusco”, which comes from the Quechua word meaning “navel” and figuratively means the centre of the world.

Some Quechua words were even absorbed into Spanish and then passed along into English. These include puma, condor, llama, and coca.

Of course, Spanish also had a great impact on Quechua. One way to say “good morning” in Quechua is “wuynus diyas”, which is close to the Spanish “buenos dias”.

Around 13% of Peruvians speak Quechua as their mother tongue. The Inca legacy means the area around Cusco still has the highest number of Quechua speakers, with 46% of people speaking the language.

However, the number of native Quechua speakers has been falling, as Spanish becomes more dominant. UNESCO has named Quechua as a vulnerable language.

It’s mostly an oral language, so Spanish remains the primary language in education and politics. Many Quechua speakers are illiterate in their native language, as Spanish is used for schooling.

The struggles of the Quechua language is related to the difficulties indigenous people face. Although there is generally pride in the history of the Inca Empire, Quechua people can face prejudice in Peruvian society. Some Quechua speakers prefer to hide their linguistic roots and learn Spanish instead.

Supporting community development in rural communities around Cusco can help to boost education and incomes, and remove perceptions of Quechua as a second-class language.

Learning a few key words in Quechua will help you connect to native speakers and help to reaffirm the importance of the language. It could also prove useful in more rural areas where it’s the everyday tongue.

The best way to learn Quechua phrases is to be immersed in the language. Volunteering in the former capital of the Inca Empire will give you the chance to get to know Peru’s indigenous people and their language. Browse GVI’s volunteering options in Peru to find programs that blend sustainable projects with culture and adventure.