0386 521 006   Apply Now
Announcement
TRAVEL UPDATE: We're open! Where can I go? and answers to your questions about COVID-19
Zaytoen
Domingo
Zaytoen Domingo is a content writer and editor based in Cape Town, South Africa. She is currently enrolled in the Masters program in English at the University of the Western Cape. After graduating with an Honours Degree in English and Creative Writing, Zaytoen completed a skills-development program for writers and became an alum of the GVI Writing Academy.
Wildlife Conservation
0 Likes
Share
Facebook
LinkedIn
Twitter

Volunteering in Africa with animals 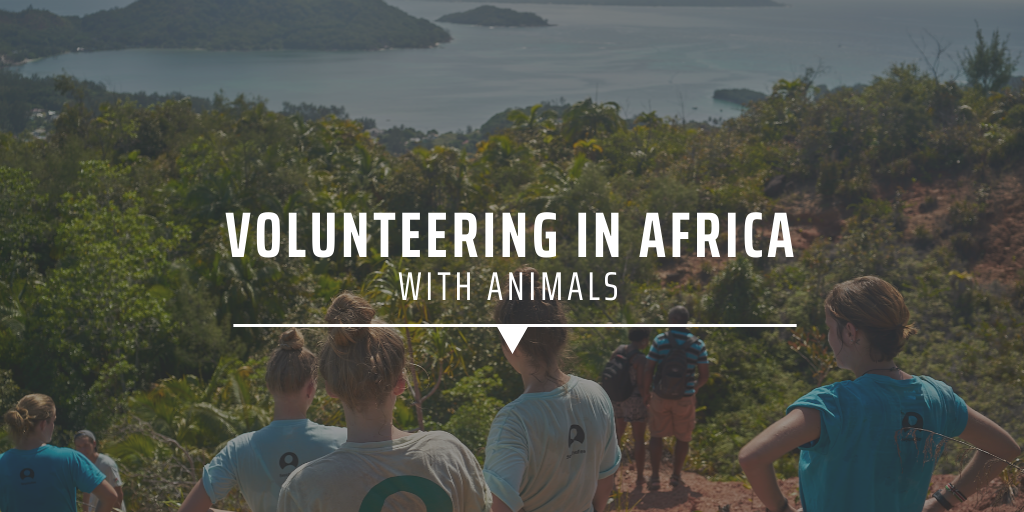 Africa is renowned for its diverse wildlife. When you go volunteering in Africa with animals, you won’t see them walking on the streets as the story goes, but you can see them in their natural habitats and lend a hand toward their conservation. Did you know that the protection of turtles in Seychelles was implemented in the Wild Animals and Birds Protection Act on 11 July 1994? Seychelles is home to two species of sea turtle – the hawksbill and green sea turtles.

Green turtles eat green too. Once they become adults, green turtles have a completely herbivorous diet. Hawksbill turtles, on the other hand, are omnivores and feed on plants like algae, and animals like crustaceans, sea urchins, fish, and jellyfish.

Sea turtles dig a pit on the shore to lay their eggs inside it. The eggs are covered by sand and then left for two months to hatch while the mother turtle returns to the sea. The hawksbill turtle nests during daytime whereas the green turtle nests at nighttime.

You can learn about and contribute to the conservation of these turtles and other interesting animals, by volunteering on our island conservation expedition to Seychelles. You will help sea turtle hatchlings get back to the sea and have the opportunity to learn about the islands and their other inhabitants.

Seychelles also houses the Aldabra giant tortoise. These tortoises are speculated to be able to live over 100 years and in many cases have outlived the scientists who studied them.

They weigh between 350 and 500 pounds, or 159 and 227 kilograms, and have short, stubby legs. These terrestrial giants often squash shrubs and small trees in their path when looking for food, creating useful pathways and clearings for other animals to navigate through easily.

You can learn more about Aldabra giant tortoises by joining our giant tortoise and biodiversity research in Seychelles. As a volunteer, you can contribute to tortoise conservation by gathering information for research, and monitoring hatchlings and young tortoises in the nursery. Did you know that sicklefin lemon sharks are homebodies? The furthest they go from home is only 1.3 kilometres. This species is named after its sickle-shaped pectoral fins.

Sicklefin lemon sharks are bottomfeeders and even eat other, smaller sharks! When hunted, they also become food themselves. They are hunted and consumed by larger marine creatures and even by people who use their liver oil for vitamins.

But, fish are friends, not food. A better way to appreciate them is to volunteer on our sicklefin lemon shark and turtle conservation program in Seychelles.

The last global report by the International Union for Conservation of Nature (IUCN), lists the sicklefin lemon shark as vulnerable with a decreasing population trend. You can volunteer with us to help conserve these animals. Elephants are known for being intelligent animals. They can recognise themselves in the mirror, meaning they are self-aware and clever.

Unlike most living groups or societies in the world, elephant herds are led by a female elephant only. The hierarchy of elephant groups is also determined by age. The older an elephant is determines how important it is in the group.

To learn more, go on a safari trip with a twist. Instead of just sitting back to watch, you can contribute to elephant research and conservation as a volunteer. Track and monitor elephants on a safari adventure and collect valuable data for research. Male lions can grow to a height of about four feet and weigh around 420 pounds (190 kilograms). That’s almost as tall as an adult human!

A lion is referred to as the king of the jungle, but this is actually not accurate. Lions are found in the savannah or grassland, with the exception of one population of lions found in India’s Gir Forest National Park.

The cheetah may not be the biggest cat in the wild, but it is the fastest. It can run up to 120 kilometres per hour.

Even though cheetahs are fast at catching their prey, they can’t outrun the sky’s predator, the eagle. Eagles are known to prey on cheetah cubs. Cheetahs are also listed as vulnerable on the IUCN Red List of Threatened Species.

But, the cheetah conservation and research project in South Africa is a program that works towards the conservation of these cats through research, observation and data collection. You can help too, by joining the program as a volunteer.

The leopard, while neither the fastest nor biggest, definitely has a more interesting origin story. According to an unknown ancient myth, this cat was believed to be a hybrid between a lion and a panther. In fact, its name is derived from the Greek words “leon” (lion) and “pardos” (panther).

Leopard cubs are preyed on by lions and cheetahs, but the leopard mother is clever enough to outwit these rival cats. The leopard mother will hide her cubs from predators, in thick bushes or holes. Did you know that hyenas are considered to be wild dogs but are actually more closely related to cats? Hyena clans can include up to as many as 80 members.

Hyenas really do laugh. Instead of laughing out of menace, hyenas laugh to express fear or excitement. The superiors of the hyena clans are the female hyenas.

Hyenas are cannibals. They will eat members of their own clan and even their own offspring.

But it isn’t all doom and gloom for our African hyenas. Hyenas are very intelligent animals and have shown to have social and problem-solving competencies.

To learn more about hyenas in Africa, you can join the hyena conservation and research project in South Africa. You will work alongside trained professionals in a nature reserve to collect valuable data for hyena conservation. Did you know that South Africa is home to approximately 850 bird species?

Since there are too many to talk about in one article alone, let’s discuss where you can experience better bird spotting opportunities. KwaZulu-Natal has an indigenous forest called the Dlinza Forest.

Here, you can find the spotted ground-thrush. This bird is secretive when mating but might be heard making their melodious mating notes.

The Western Cape is home to more bird species than the United States of America and Canada combined. South Africa’s national bird is the blue crane, which is called “paradiseus” in Latin. This means “paradise”.

The famous Kruger National Park is situated in Mpumalanga. Here you can find the bat hawk bird. This bird species only hunts in the sky, and eats bats and other small birds.

Another famous place is the Walter Sisulu National Botanical Garden in Gauteng. Their bird list contains 887 bird species, including the hadeda ibis, the booted eagle and the European bee-eater.

You can contribute to the conservation of South Africa’s 854 bird species by becoming a volunteer on a bird research and conservation project. Did you know that South Africa is home to the largest population of rhinos in the world, with a figure of 80% of the global population? The rhino is also the second largest land animal after the elephant.

South Africa is known for its famous “big five” – elephant, lion, buffalo, rhino and leopard. The big five is so important that they are imprinted on South Africa’s bank notes, with the rhino found on the ten rand notes.

The black rhino is smaller than its counterpart. It is also called the hook-lipped rhino and has only three toes on each foot.

Rhinos can fall asleep even while standing. They sleep up to eight hours a day, just like we do.

There are approximately 5,366 and 5,627 black rhinos left in Africa and 17,212 to 18,915 white rhinos. The IUCN Red List of Threatened Species rated the white rhino as near threatened and the black rhino as critically endangered, but both population trends are listed as increasing.

If you want to get involved in conservation efforts to keep rhino populations increasing, you can become a volunteer. On the rhino poaching awareness project, you will help raise awareness on anti-poaching initiatives to protect the rhino. Did you know that Zanzibar is home to the largest number of dolphins in Tanzania? These include the bottlenose dolphin, the Indo-pacific humpback dolphin and the spinner dolphin.

Dolphins are able to send sound waves through the water to find food and to navigate through a process called echolocation. The sound waves will hit an object and bounce back to the dolphin, which will then interpret its code.

The bottlenose dolphin’s skin is grey along the top and white below. This protects the dolphin from predators in a unique way.

Dolphins are known to be social animals and do everything together, from hunting to playing to swimming. Dolphin pods can have up to 1,000 members.

Diving with dolphins was a popular trend in Zanzibar until people started to notice the effects of human interaction. People are now encouraged to interact with dolphins in a more ethical way by keeping a distance.

Play your part in ecotourism by volunteering to work with dolphins in Zanzibar. You will conduct surveys with a team of professionals, on dolphin behaviour and tourist interaction. You will also help local people to better understand how to interact with dolphins ethically.

After learning only a few fun facts about wild animals and conservation, volunteer to work with animals found in Africa to broaden your knowledge and to add to their conservation.