How mangroves are fighting cancer, climate change and tsunamis

Compelling reasons to protect these habitats have surfaced in recent years as we begin to understand more about mangroves.

Once perceived as ‘swampy wastelands’, mangrove forests are now being lauded for some miraculous feats. From curing disease, buffering coastlines from extreme weather, and fighting climate change, there is more to mangroves than mere mosquitoes.

Here are seven swampy facts about mangroves that might surprise you:

In 2004, an earthquake in the Indian Ocean triggered a catastrophic tsunami that battered shorelines across India and Southeast Asia. Although there was significant loss of life, with an estimated 227,000 people killed, scientists have since concluded that the tragedy would have been much worse if mangrove forests were absent.

The dense roots and branch networks of the mangroves behaved as a buffer and slowed down the monstrous waves, some of which reached almost 100ft high. In the worst-hit area, the waves left devastation half a mile inland in the province of Aceh, in Indonesia.

However, the damage in villages located behind mangroves was significantly reduced, and subsequent studies suggest that mangroves can reduce casualties in nearby settlements by 8%.

Over the past 15 years, community-based initiatives, such as the Green Coast Project, have encouraged the restoration of mangrove forests that were damaged in the 2004 tsunami in order to reinstate this natural barrier. 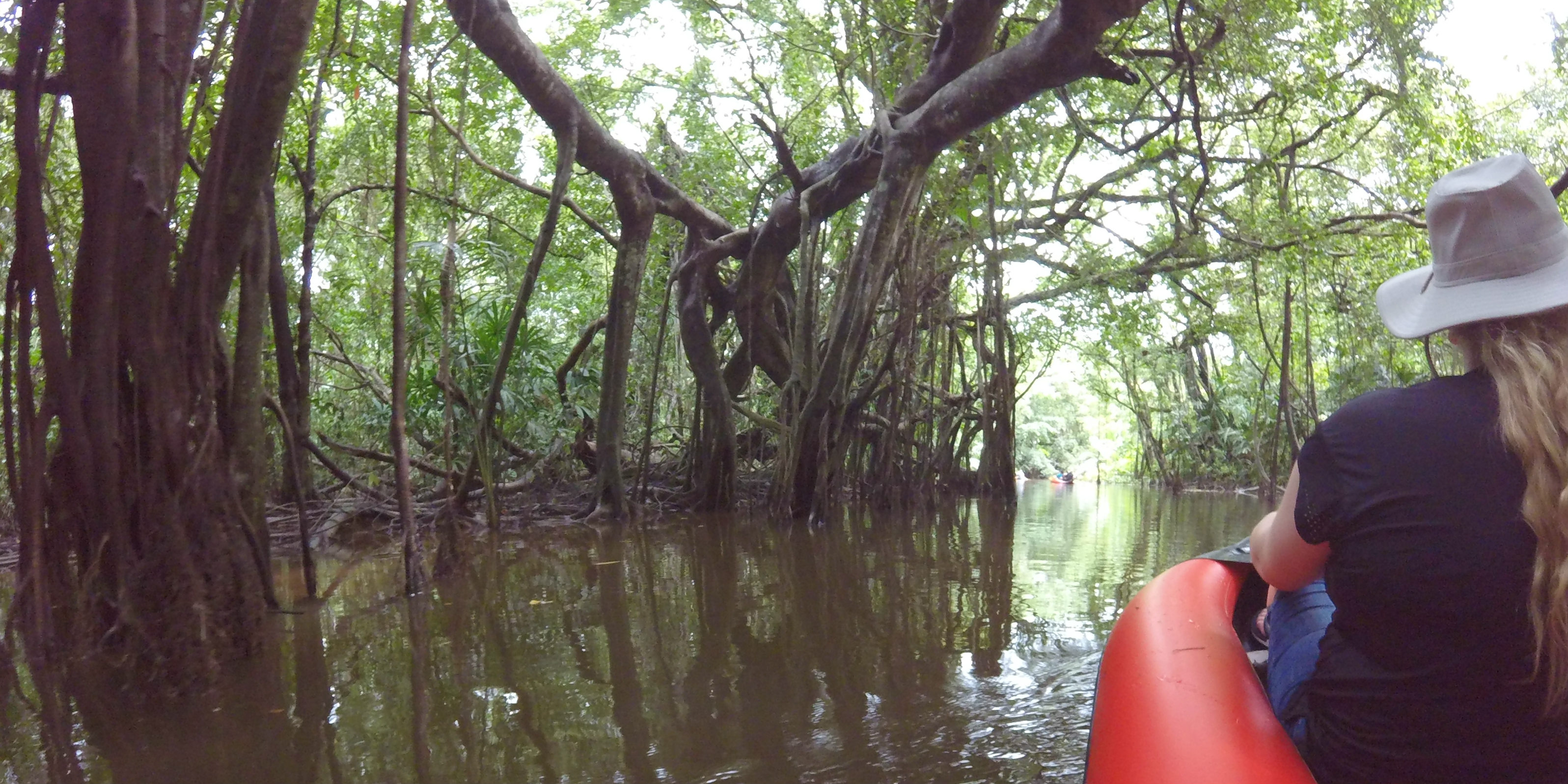 We all know that plants photosynthesize, using up carbon dioxide and emitting oxygen into the atmosphere in order to grow. Yet mangrove forests are specially adapted to storing carbon in soil and dead roots.

According to research, 14% of coastal carbon sequestration is thanks to mangrove forests.

Due to their ability to absorb carbon, mangrove forests are known as ‘carbon sinks’ or ‘carbon-rich biomes’. By storing excess carbon, they help reduce global warming as there is less carbon dioxide trapped in the atmosphere.

In a way, mangroves are like Pandora’s box. By destroying them to establish shrimp farms, a practice that has expanded exponentially in the past 30 years, a high volume of gas is released. The carbon that was safely stored away is unleashed into the air. 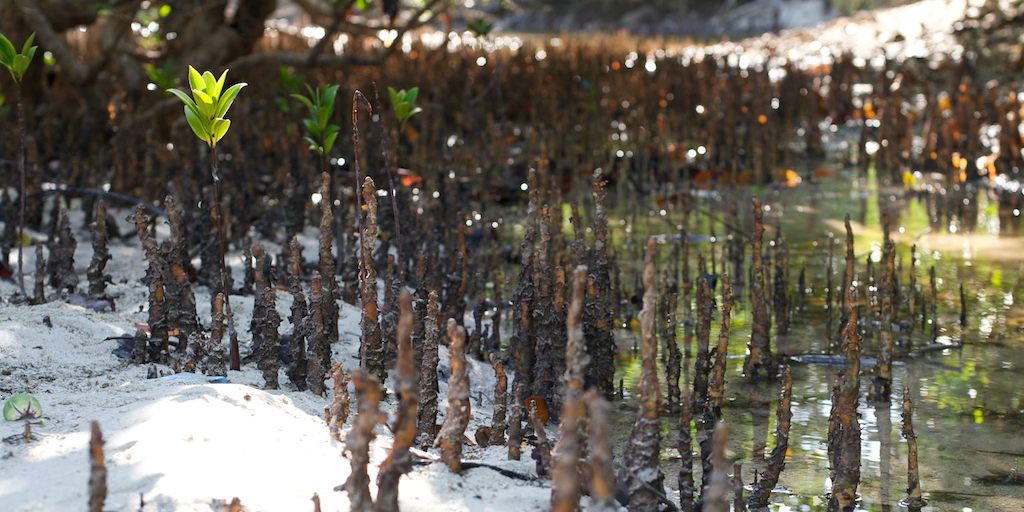 To help solve the problem, carbon offsetting projects are giving coastal communities an additional incentive to conserve their mangrove forests.

In the fishing village of Gazi, Kenya, locals are planting mangrove trees and selling ‘carbon credits’ to fund sustainable development in the area. What’s more, fish populations have increased.

These working examples show there are smart solutions that are not just win-win for the communities involved, but also for the planet.

3) Medicine from mangroves is helping to cure cancer 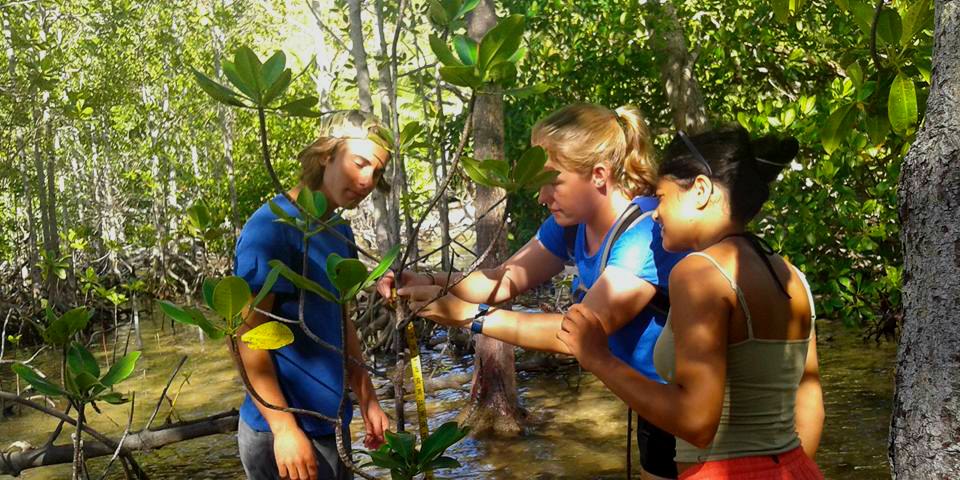 GVI participants measure growth as part of a mangrove survey.

Cancer remains the biggest cause of mortality for humans. Although chemotherapy is still the most effective way to treat most forms of the disease, it has many debilitating side effects.

A less arduous treatment has been sought after for years, and scientists have recently found a new contender from an unlikely source – mangrove plants.

Containing a rich source of anticancer products including steroid, triterpenoids, saponins, flavonoids, alkaloids and tannins, drugs made from mangrove plants have shown an impressive ability to fight lung cancer, in particular.

Scientists studying leaves from mangrove trees in India have found an ‘anti-cancer molecule’ that could be used to prevent or cure lung cancer, along with leukaemia and breast cancer.

Despite the exciting medicinal potential, it may be some years before these products are ready for patient use. 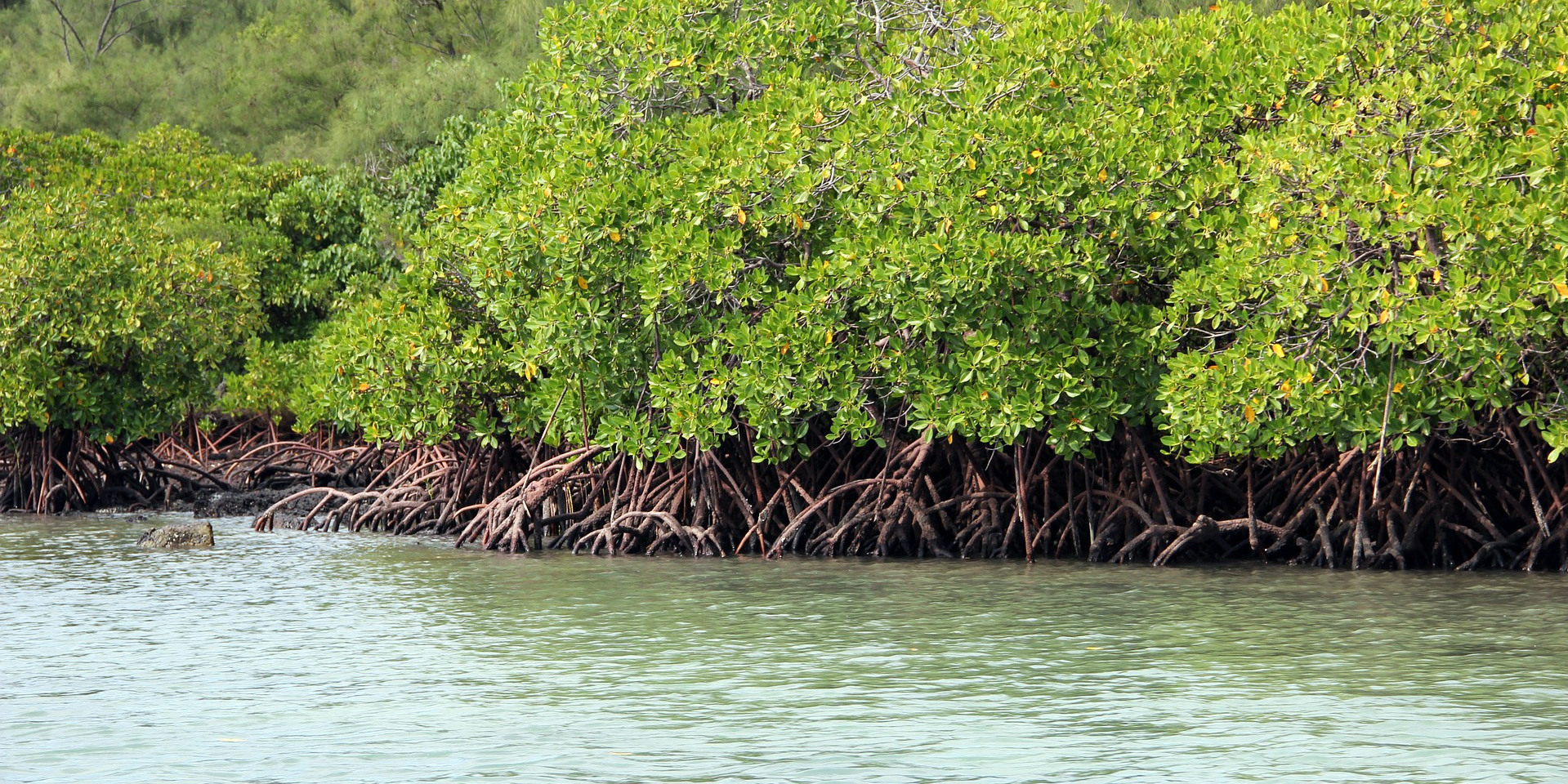 The tangled roots of mangrove trees reduce erosion by stabilizing sediments that would otherwise be lost to the sea. By making the coastline less susceptible to washing away, the biodiversity of the area is maintained.

On top of that, valuable farmland is protected. Landowners are able to continue using their land, and fewer people are forced to move further inland.

In fact, sometimes these mangrove roots create shallow mudflats that extend the shoreline, creating land that was not there before. 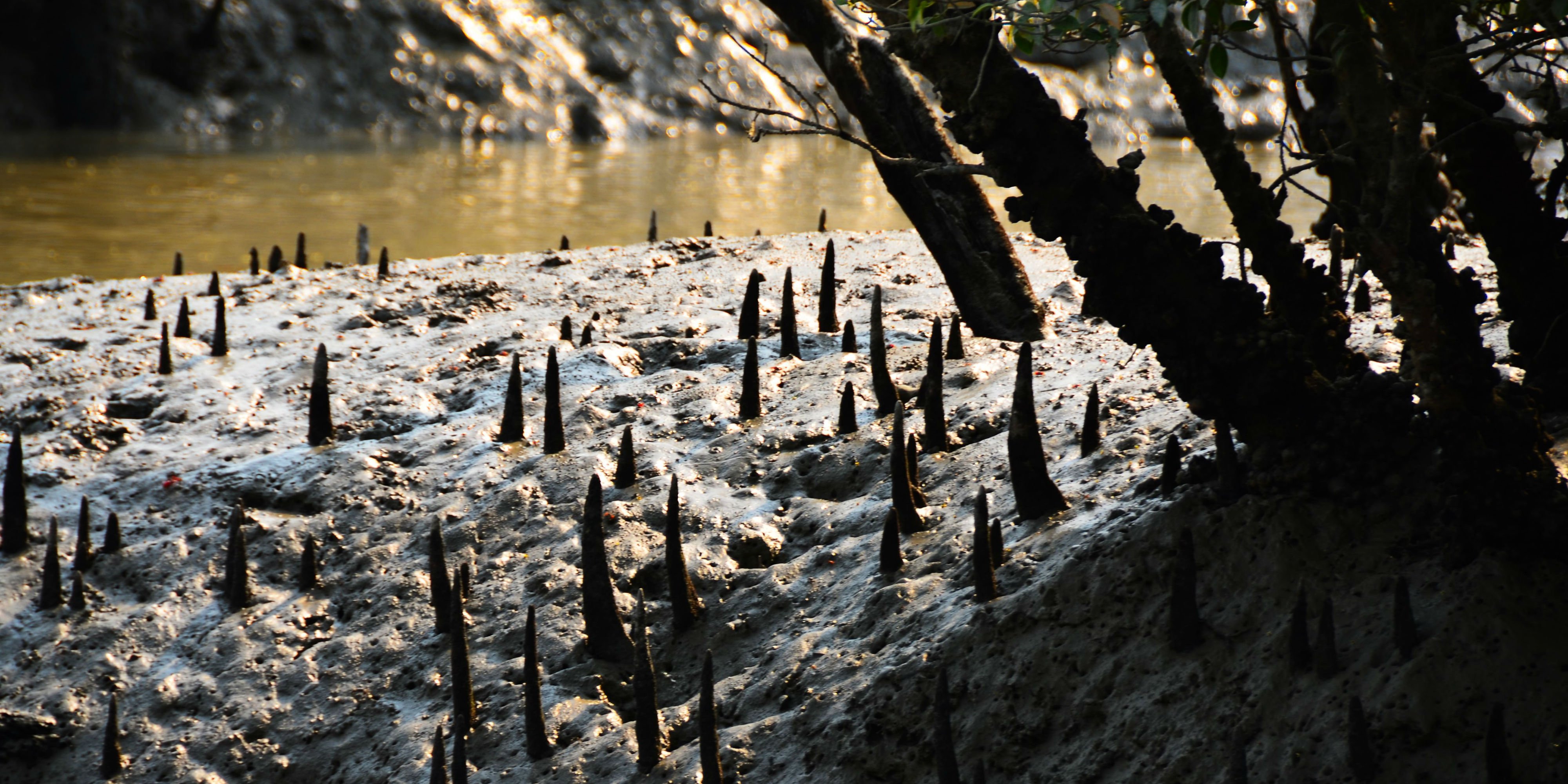 The aerating roots of mangroves allow them to grow out of oxygen-poor mudflats. Original photo: Girish Gopi

Erosion of land usually occurs through weathering, such as the constant force of waves breaking, or as a result of large storms. The dense roots of the mangrove forest not only protects the coastline from the sea, but also the reverse: seagrass meadows and coral reef habitats are spared an onslaught of sediment from the shoreline. This is important since both  these ecosystems are vital for many marine species, but are vulnerable to changes in external conditions.

Studying the coastline of Thailand, experts were able to deduce that coasts without mangroves suffered an increased rate of erosion, whereas shorelines that had mangroves were less affected.

5) Sharks, and other fish species, use mangroves as nurseries 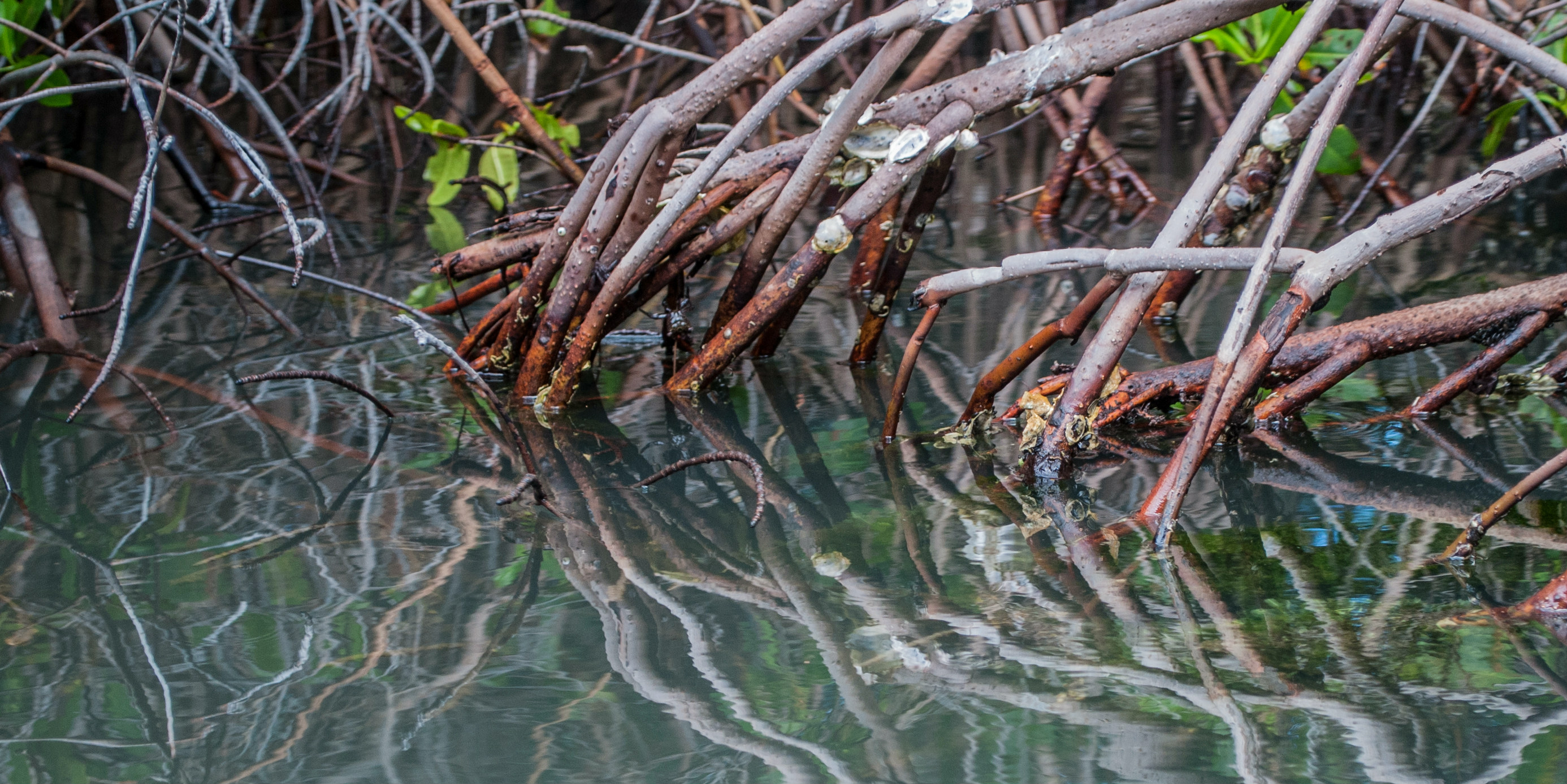 Young fish are vulnerable to predators on the coral reef or in the deep sea. To sustain population numbers, many species take to the safety of the mangroves to spawn, where larger predators are unable to follow them.

Organic matter from the mangrove forest, such as leaves and detritus, form the base of important marine food chains. There is plenty of food in the mangroves for sheltering fish, making it the perfect nursery in which to grow.

Sharks also use mangroves as nurseries for their young. Lemon shark pups instinctively swim away from the mother and towards the mangroves after birth. Here, the juveniles must learn to hunt in order to avoid starvation.

Learn how you can make a difference by participating in GVI’s lemon shark conservation project. 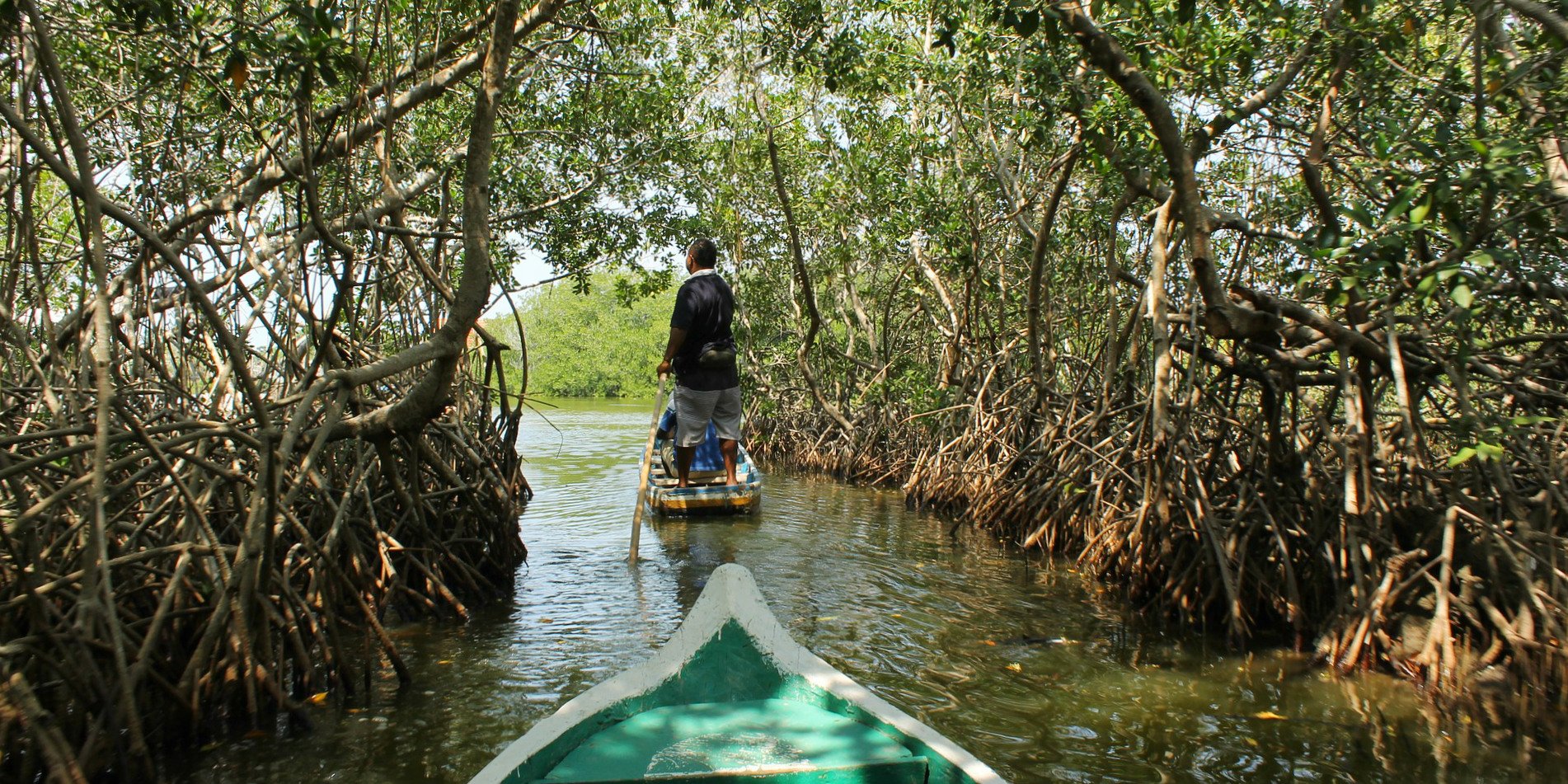 Along with absorbing excess carbon, mangrove forests remove pollution from the soil, including toxic heavy metal. Mangrove forests therefore purify the water that flows out to the ocean. Without this process, contaminated water would spill into the sea, affecting the food chains for marine life, which in return could poison humans through consumption.

Although shrimp aquaculture and oyster farms still pose the largest threat to mangrove forests, Thai shrimp farmers have bucked this trend and have started to replant mangroves.

The shrimp farmers recognized that using chemical fertilizers, pesticides, disinfectants and antibiotics is not the best way to rear the largest yields of shrimp. Instead, a more natural solution seemed to work better.

By reinstating mangroves and allowing them to flourish, important fish populations have been re-established and Thai farmers are reaping the rewards, without the need for expensive chemicals. 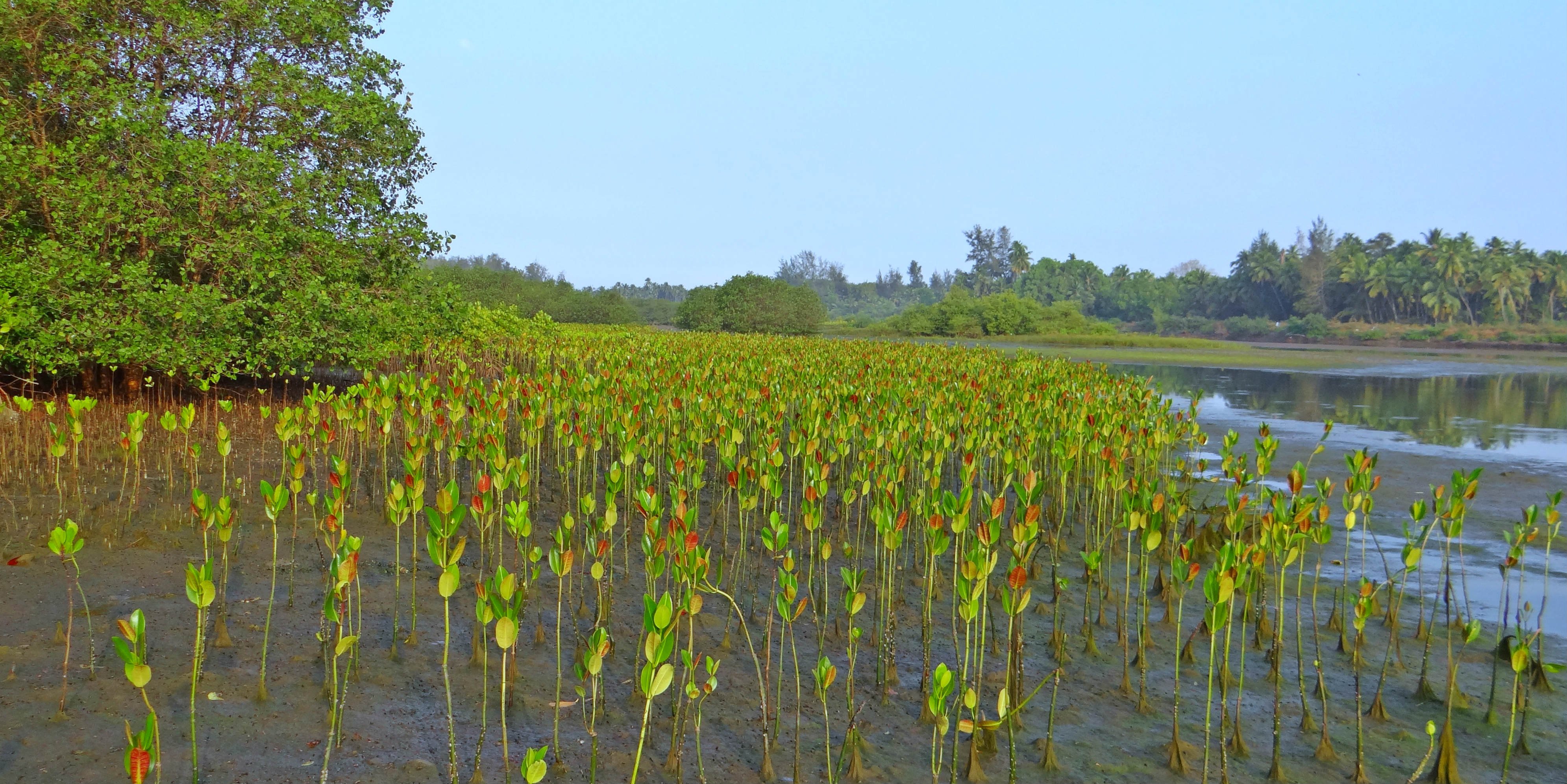 Mangrove seedlings in Karwar, India will one day help to bolster the river’s edge.

In the Virgin Islands, some coral reefs are even latching onto red mangrove tree roots. The shade created from the mangrove protects the coral reefs from bleaching, which is caused by solar radiation and warmer sea conditions.

In addition, the brackish water of the mangroves appears to reduce the acidity of the water. The result is that the structure of the coral reef is more stable, and growth is accelerated.Interestingly, tree-climbing fish, or mudskippers, are seen to be ‘bio-indicators’ for the health of mangrove habitats.

Mudskippers live on mudflats in mangroves and are sensitive to pollution, such as litter, runoff chemicals from the land, or wastewater. If mudskipper populations are prolific, it means that there is less pollution in the mangrove as a whole.

With habitat loss and degradation of mangrove forests, the biodiversity of species continues to be threatened, including some of the quirkier animals:

Get involved in a marine conservation project to help protect mangrove forests, hawksbill turtles, or lemon sharks. GVI has sustainable projects in Curieuse in the Seychelles, and Phang Nga in Thailand.

Six critical global issues: What are the world’s biggest problems and how can I help?
Read More
Why is gender equality important?
Read More
The “Should I take a gap year?” quiz
Read More
Apply Now
Enquire Now
Call Back Request