Once upon a time there lived in the beautiful base of Jalova, a boa constrictor. He lately lived under a branch and some iron roof sheets behind the volunteers dorm and next to the volunteers bathrooms. 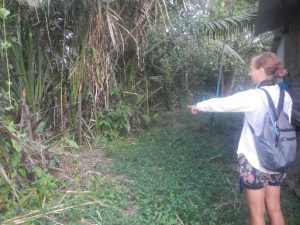 On a sunny day Kellie had to go to the bathroom so badly. On her way she saw something black with yellow diamonds, moving in the woodpile. First she could not believe her eyes, so she asked another volunteer to have a look at the woodpile. His name was Tom. He always has his camera with him, so he took some nice pictures and shouted loudly three times SNAKE SNAKE SNAKE. As fast as he is, staff member Mac came with the huge snake bucket and an iron stick to grab the snakes throat and put him safely in the bucket.

Unluckily the boa was so big that he could not get the snake in the bucket. After a minute all the staff members were looking for a solution to move the snake safely. But they could not find any solution.

In the meantime Kellie almost peed in her pair of trousers because she was scared to take her wee in the bathroom so close to Barry the boa that she went to the sea to take a pee/swim.

After three days the 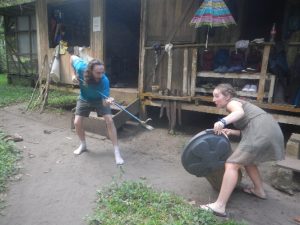 staff finely came with a solution to move Barry. During the big clean day, some of the staff and volunteers had the job to remove the woodpile. Sadly Barry moved by himself – probably because the bathrooms were to smelly for him.

So our lovely base returned back to the snake-free-base with lots of iguanas and glorious fireflies who look like stars in the grass. You have to remember that the real stars are even more beautiful. Even the planet Mars would agree- we see him every night dancing between our stars.

“You never see things again like you saw them in Jalova.”

Welcome to the Jungle: My first week as a conservation Intern
Read More
Three types of conservation internships and where you could travel to to get involved
Read More
Take an adult gap year with these seven volunteering projects for the mature traveller
Read More
Apply Now
Enquire Now
Call Back Request