Another Day - Another Wreck 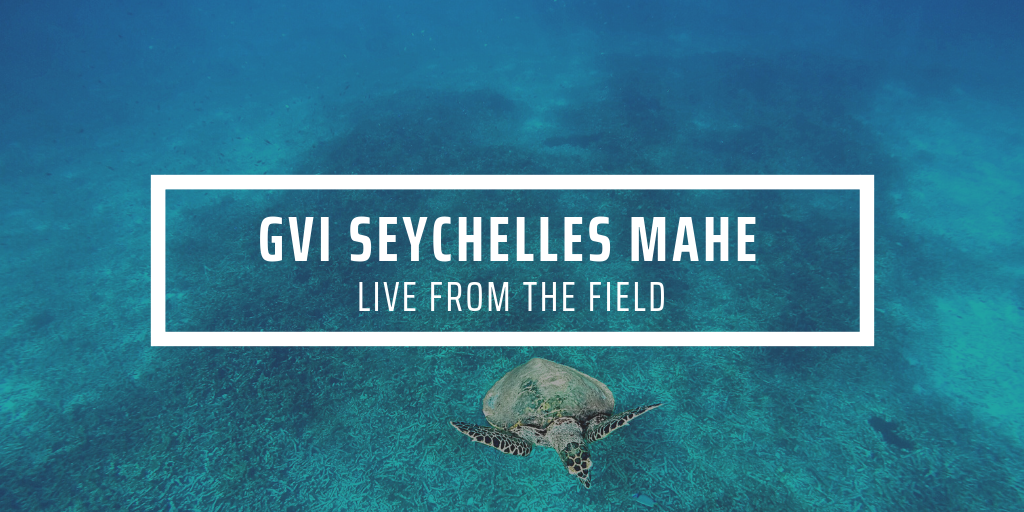 Here around Mahé we have multiple wrecks at various depths and they are something for everyone from diving beginner to depth junkie. Whilst obviously being of anthropogenic nature, the wrecks harbour an incredible amount of marine life from schools of fish seeking shelter between the ruins to nurse sharks and giant groupers sleeping inside the decaying hulls.

allowest one and the most accessible one is called Twin Barges and consists of 2 old fishing and transport ships that were sunk right outside Bel Ombre Harbour, with easy access to Scuba Divers of all levels. Lying flat on the sandy bottom the wrecks stretch from around 14m on the shallow end to 23m on the deeper end of the second Barge. On our spot dives and coral watch dives or when we finish our surveys we go over to the shallower Barge and have a look around to see what surprises the wreck holds for us. Twin Barges – Remains of the lower barge including some of the deck apparatus.

The second wreck is called Dredger, an old ship that was sunk slightly off the coast to the east of Beau Vallon and lying at around 27m it’s something for the more experienced divers. The wreck lies on its side with the keel facing diagonally upwards and as it accumulated a few holes over the years it allows for partial penetration by scuba divers. Schools of rare snappers can often be seen here but unfortunately the wreck is well beyond our diving depths and something for a weekend trip withone of the local dive shops. A large African Coral Cod grouper made one of the wrecks it’s new home.

Next up is the Aldebaran wreck, a large vessel that was sunk outside Anse Major Bay. Authorities initially sunk the ship right outside the bay at a depth of 20m, with the aim to create a new wreck with easy access for scuba divers. Many years ago, a massive storm pushed the ship into deeper waters and it now rests perfectly upright and ready to explore at a daunting depth of 40m. Bow and top deck of the Aldebaran. Taken by DiveSeychelles UWC

With it being that deep, its not very easily accessible by divers but its still a sight to see for wreck lovers with large fish such as giant groupers frequenting the wreck quite often! Unfortunately, the depth it lies at doesn’t allow for much exploration as divers only get 7min of bottom time meaning after these 7 minutes are up, they must start ascending to shallower waters to avoid the risk of decompression problems. 40m is also the maximum depth for recreational scuba divers. Divers that want to explore it will need to have PADI’s Deep Diver qualification. The RFA Ennerdale – King of the Wrecks

Lastly there is the king of all wrecks, the Ennerdale. Whilst the ship marks a dark point of the Seychelles history, its sought after by scuba divers from around the world. The 211m long oil tanker struck an unmarked pinnacle off the coast of north east Mahé and being unable to manoeuvre, soon started spilling oil into the Seychelles waters. The authorities couldn’t figure out how to manage the situation as the ship was sinking and the weather conditions wouldn’t allow for the oil to be pumped out of the hull. After a few weeks, things took a very drastic turn. With the winds changing to offshore direction, the plan was made to blow a hole into the side of the ship’s tanks, let the oil be washed away from the Seychelles into the open ocean and sink the ship right where it was. The military was called and what followed was something out of a James Bond movie: scuba divers and helicopters attached charges to the sinking ship and with seconds left before detonating the divers were picked up by speedboats and rushed away from the exploding ship. The Ennerdale before she became the Seychelles’ most notorious wreck.

Now, the Ennerdale lies in around 30m of water, stretching wide and far after the hull exploded. When we went out to dive the ship, we had no marker buoy as reference and had to ask a nearby fishing boat to use its depth finder to show us if we were in the right spot. After descending onto absolutely nothing, Stu and me set off in the direction we hoped the wreck would lie. After 5mins we saw an eagle ray the size of a Manta, something neither of us have ever seen, and soon after a giant grouper that would have been more than 2m long.

It was definitely a day to remember and we are hoping to go back and explore it a bit more as soon as we can! My 2020 travels: Volunteering in a COVID-conscious way
Read More
Eight of the best destinations to travel to when volunteering worldwide
Read More
What is a digital detox and why is it a good idea?
Read More
Apply Now
Enquire Now
Call Back Request